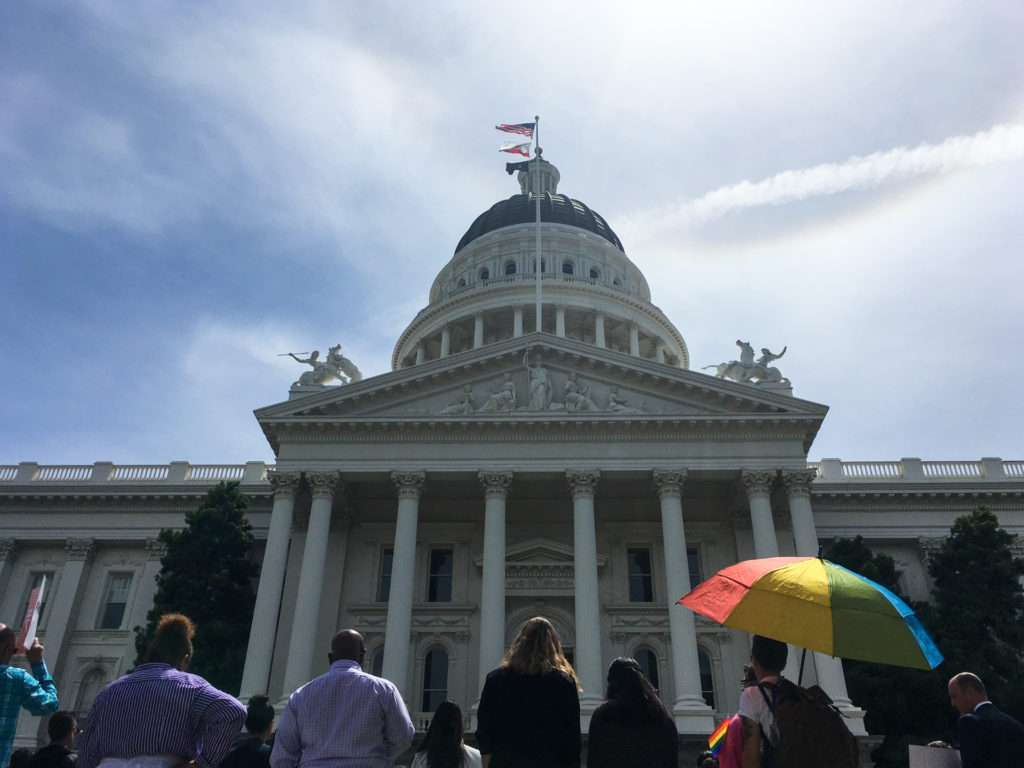 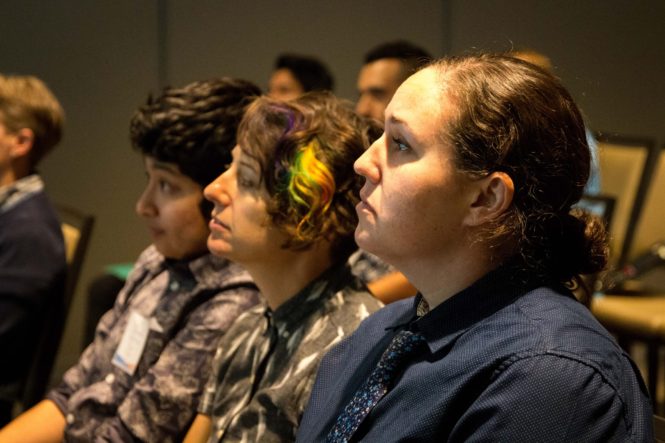 #Out4MentalHealth Task Forces support local community members and organizations with engaging in LGBTQ Mental Health Advocacy at the county, state, and federal level. Each Task Force is led by local community members and organizations and open to everyone interested in advocating for LGBTQ Mental Health Equity.

NorCal OUTreach Project’s mission is to support and unite the LGBTQ+ community and its many Allies by providing social connection, public events, support groups, and educational training. We strive to be inclusive of all genders and sexualities, celebrate the diversity within our community, practice cultural humility and foster health and wellbeing of the people we serve. We seek to improve the lives of everyone by increasing understanding, acknowledgment, visibility and appreciation of the LGBTQ+ community, thereby making rural northern California a safer and more accepting place for all.

Tina Stephenitch, program director of #Out4MentalHealth Task Force and their day job is program manager for Sunrise Wellness Center in Redding. They are passionate about serving their community, learning from others and meeting new people. They have spent their entire adult life advocating, educating, and serving communities. Their favorite fun activities: travel international/domestic, music, nature and meeting people. They are passionate about NCOP’s vision to advocate and support the LGBTQ+ community in Shasta County. They are excited to be a part of expanding access and care of mental health support services in Shasta County.

The Oakland LGBTQ Community Center is dedicated to enhancing and sustaining the well-being of lesbian, gay, bisexual, transgender, and queer (LGBTQ) individuals, our families and allies, by providing educational, social, and health related activities, programs and services.

Lania Watkins is a West Oakland Native who’s work in Oakland has been primarily with youth and adults from all walks of life. Her experiences have been working with community members engaged in sex work, current and former foster care youth, the re-entry population, MSM and the un-housed community. Lania has spoken nationally on various panels and podcast on the topics such as : Aging out of sex work and cisgendered Woman & PrEP. She is a river guide and volunteers providing river trips to people living with HIV. Her passion has been to build appropriate programming for community members.

Still Bisexual is a 501(c)(3) bisexual education and health advocacy organization representing folks across the nation who identify as bisexual, pansexual, fluid or queer—or prefer to use no label at all to define their attraction to multiple genders. Launched as a social media video campaign in 2015 in which participants told their personal stories of how they came to accept their bi+ identity, Still Bisexual expanded into an organization that raises awareness about the bi+ identity not just through social media but through trainings and an educational curriculum currently in use by Los Angeles Unified School District. Still Bisexual addresses the unique mental health needs of the bi+ community through its work with the #Out4MentalHealth project and the Los Angeles Department of Mental Health’s LGBTQIA2-S underserved cultural committee.

Nicole Kristal has advocated for the bisexual community for the past 20 years. She co-authored The Bisexual’s Guide to the Universe, which won a Lambda Literary Award in 2006, but is best known for launching the #StillBisexual campaign in 2015, a video project in which bi+ people of all races, ages and gender identities shared their stories of bi-erasure and self-acceptance. The campaign received nationwide coverage from NBC News, Cosmopolitan, Bustle, Huffington Post, Towleroad, The Daily Beast, and was listed by the Human Rights Campaign as one of seven “must-have” resources for bisexual health. Still Bisexual became a 501(c)(3) organization in 2019 and its LGBTQ+ education curriculum videos, which Nicole created, are used by Planned Parenthood L.A.’s sex education program to train peer advocates who reach 15,000+ students at LAUSD each year. In 2019, Still Bisexual helped organize the world’s largest-ever Bi Pride parade and festival in the City of West Hollywood. Nicole currently co-leads the San Fernando Valley Task Force for the #Out4MentalHealth project as a subcontractor for the California LGBTQ Health & Human Services Network, and recently became chair of the Los Angeles County Department of Mental Health’s LGBTQIA2-S Underserviced Cultural Committee since 2019.

Gender Justice LA (GJLA) is a grassroots social justice organization led by and for gender non-conforming, two spirit, trans, Black, Indigenous, people of color.  GJLA organizes, holds space, provides resources, and collaborates with others so that our communities can: resist oppression, develop community responses to violence, heal from present & historical trauma, and come together in ways that feel brave & affirming.

Ezak Perez was born and raised in and around Tongva land (Los Angeles, CA). They come from Hopi & Paeaekila Puebloan people. He identifies as Native, Xicanx & Latinx. They are two-spirit of center, indigiqueer and trans. Ezak has been facilitating and organizing locally in LA as well as nationally for the past 15+ years. They work at the intersections of racial, economic and gender justice. Ezak is an abolitionist, a strategist, co-conspirator and a believer that we will absolutely win! He carries both Eagle & Deer medicine.

Our mission is “To create a safe place and empower the LGBT community by connecting them to essential resources,” The Imperial Valley LGBT Resource Center was founded in April 2015 by Rosa Diaz, an Imperial Valley native, retired youth correctional counselor and retired social worker. Rosa experienced first-hand the lack of LGBT-safe and friendly spaces when she lost her position as a church leader after coming out as lesbian. Her passion for improving the quality of life for the LGBT population and her desire to make a difference led her to establish a LGBT center to address the needs through drug abuse education, HIV testing, individual and family counseling, domestic violence groups, anger management, youth engagement programs, and community events.

Born in San Diego, his family decided to make a move to the city of Calexico. He has been extremely fortunate to have worked for two fortune-500 companies (Apple and Wells Fargo) while living in Imperial County, which is known as a disadvantaged community that currently lacks equity in many industries that provide services to its residents from postsecondary educational institutions to proper economic development. He is most looking forward to graduating with my B.A. from San Diego State University through its Imperial Valley campus in Calexico in May 2021. He decided to major in public administration and psychology with a minor in linguistics. He loves serving his community through its students. This year, he is President of the Associated Students at his campus and values the culture of shared governance. He also serves as the Secretary of the Imperial Valley LGBT Resource Center, the only LGBT-related nonprofit in our county, which has helped me become much more competent when dealing with my identity as a questioning individual.

You can request #Out4MentalHealth fact sheets to hand out at events or keep in your lobby or waiting room. Fill out this form and we will mail or email you the requested materials. You can also preview or download all of our fact sheets using the links below. 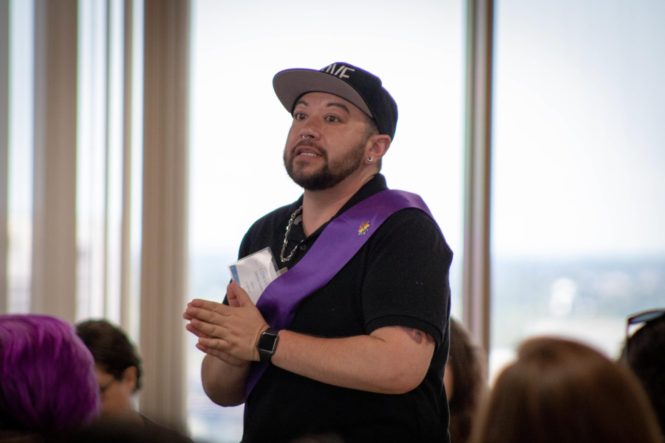 Email Mandy Taylor to learn about our Advocacy Workshop.

Surveying the Road to Equity: The Annual State of LGBTQ Communities 2019 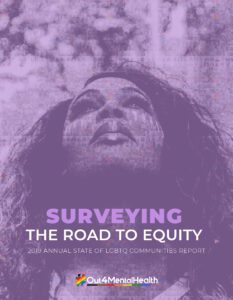 Surveying the Road to Equity: The Annual State of LGBTQ Communities, 2019 presents findings from the 2019 #Out4MentalHealth Community Survey and Bisexual Needs Assessment. The report summarizes the issues affecting LGBTQ health, mental health, and well-being, and provides recommendations to reduce stigma and improve access to LGBTQ-affirming services. The report also details findings and recommendations from two roundtables with experts on LGBTQ Sex Work and LGBTQ Refugees and Asylum Seekers.

Mapping the Road to Equity: The Annual State of LGBTQ Communities 2018 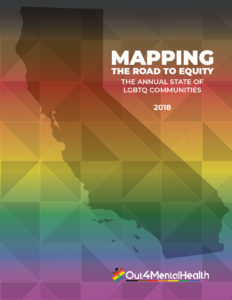 Mapping the Road to Equity: The Annual State of LGBTQ Communities, 2018 lifts up the voices of LGBTQ Californians to inform the work of community advocates, service providers, and policymakers. This report details the current state of LGBTQ health policy in California and the ways that a variety of issues impact LGBTQ mental health, including law enforcement, homelessness, school policies, and sexual orientation and gender identity data collection, and more.

First, Do Not Harm 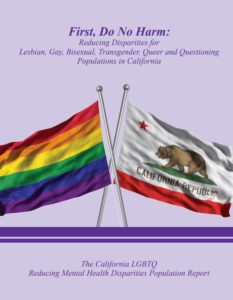 The need for culturally competent mental health services is great, but greater still is the need to eliminate the multiple harms that contribute to negative mental health throughout LGBTQ communities. First, Do Not Harm: Reducing Disparities for Lesbian, Gay, Bisexual, Transgender, Queer and Questioning Populations in California represents a snapshot in time of certain LGBTQ people living in our state.


How To Get Involved 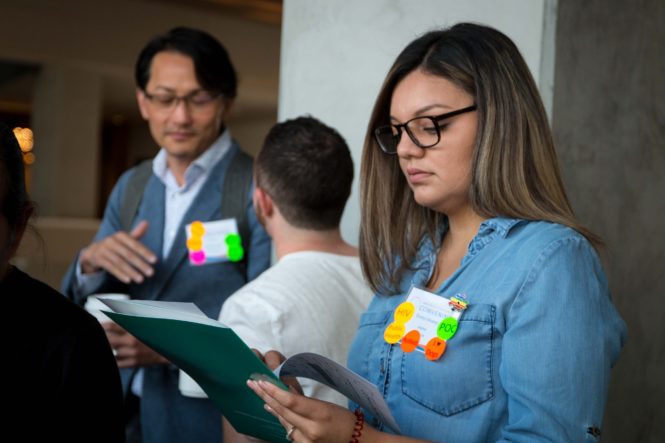 If you would like assistance with improving LGBTQ mental health services in your county, please email info@out4mentalhealth.org for technical assistance.