Honoring the Leadership of LGBTQ Women this Women’s History Month

This women’s history month, the Network celebrating the leadership of LGBTQ and allied women by highlighting the work of some amazing Californians. Up and down the state these women work to improve the lives of LGBTQ people in their communities, while inspiring people around them. We asked them to share some of their wisdom with the Network.

Do you have another amazing LGBTQ woman you’d like to recognize? Shout out their name in the comments section! 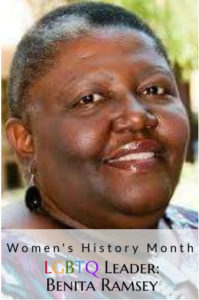 Benita Ramsey is a Reverend at Unity Fellowship of Christ Church Inland Valley and a longtime social justice advocate in the Riverside.

A piece of advice she has for young women who want to make a difference in their communities is:
“You represent the change you have been waiting for. Embrace your passion. Listen attentively to what your own inner voice is telling you. Know that YOU are worthy, powerful, and ready. This is your moment. This is your time. Make your move. We’ve got your back.” 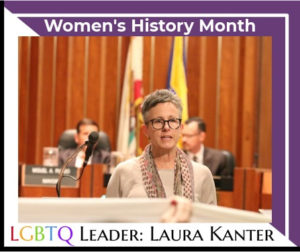 Laura Kanter is the Director of Policy, Advocacy and Youth Programs at the LGBT Center Orange County – and a tireless advocate for LGBTQ youth and all marginalized communities.

What’s one thing that has helped you succeed as a queer woman?
“What has helped me as a queer woman is to surround myself with other queer feminist women who speak truth to power and who refuse to force themselves into prescribed gender roles and behaviors. I don’t know if this has helped me to succeed, or made things more difficult but I will not let straight women define me as a woman. Sometimes this pisses other people off. So what has also helped me is to be uncomfortable myself and to make other people uncomfortable.
“I also truly believe that my success, which is still pending, rests on my willingness to actively not only resist, but to relentlessly confront white supremacy and patriarchy in solidarity with all other oppressed groups.”

A piece of advice she has for young women who want to make a difference in their communities is:
“Do not waste time trying to fit in. Make your own way.” 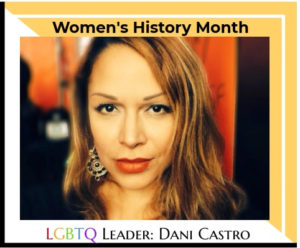 Dani Castro is a Research Director at the Center for Excellence for Transgender Health at UCSF, a co-founder of Trans Advocates for Justice and Accountability (TAJA), and community advocate.

A piece of advice she has for young women who want to make a difference in their communities is:
“Creating positive change is love in action and we must remain steadfast in our efforts to practice loving kindness with ourselves and those we interact with.” 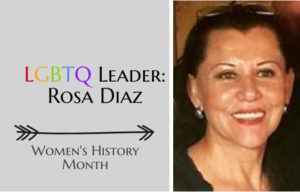 Rosa Diaz is the Founder and CEO of the Imperial Valley LGBT Resource Center – providing a safe and welcoming space for LGBTQ people along the California-Mexico border since 2015.

One thing that helped her succeed as a queer woman is:
“Honesty. Having been totally dedicated to the church and afraid of being honest about my orientation, I felt I was able to accomplish more by being opened and speaking my truth. I am humbled to be a leader of the LGBTQ community and to help make a difference in our community by providing a safe place that allows others to be themselves, speak of themselves opening and work on building on truth. I am where I never imagined I would be had I not had the courage to speak up.”

One of her role models and mentors is:
“Dr. Graciela Morales Scott is my educator and mentor. She was my college psychology teacher. She obtained a PhD against many odds: dark skin Latina, low income, growing up in the 50s when women were not encouraged to seek higher education. She earned a Bachelor of Arts Degree in Psychology and a Masters of Arts in Educational Counseling from Cal State University, San Bernardino and a Doctor of Philosophy in Education from the University of California, Los Angeles. She became my role model.”

A piece of advice she has for young women who want to make a difference in their communities is:
“Be true to yourself. Act according to who you are and what you believe.” 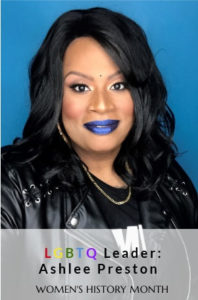 One thing that has helped her succeed as a transgender woman is:
“One of the things that’s help me succeed is my unwavering courage; the courage to think outside the box, the courage to go off the beaten path, and the courage to do so unapologetically.”

Her role models and mentors are:
“Aside from my mother who was a hardworking single parent that gave me everything growing up; my biggest role models are Michelle Obama, Zora Neale Hurston, Audre Lorde, Janet Mock, Coretta Scott-King, Eartha Kitt, and Dr. Kimberlé Willams-Crenshaw several others). All of the above are/were the epitome of courage, dignity, grace, and resilience.”

A piece of advice she has for young women who want to make a difference in their communities is:
“The best way to make a difference in your community is to attend community meetings. Not only do you meet other people who seek to also create change; you also get to discover what the greatest need is. I also personally recommend volunteering at food lines, shelters or doing street outreach. There’s nothing quite like the gratitude that comes with making someone’s day who may have it a bit harder than you.” 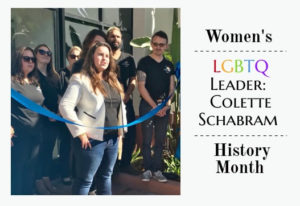 Colette Schabram is the Executive Director of Pacific Pride Foundation in Santa Barbara, which is home to a dynamic range of services and activities that support individual LGBTQ+ people in their efforts to achieve a positive sense of identity, purpose, social support and well being.

One thing that has helped her succeed as a transgender woman is:
“I think being queer and experiencing life with lesser rights has expanded my awareness of inter-sectional issues, issues outside the queer space but still impacting marginalized communities. I see the work I’ve done for LGBTQ+ rights as a commitment to social justice causes beyond sexual orientation or gender identity.”

Her role models and mentors are:
“I have many! Lorri Jean of the Los Angeles LGBT Center is certainly one of them. She leads the largest Center in the world in such an important moment in our movement’s history. The network of Centers she has helped create through CenterLink enables smaller, independent agencies like Pacific Pride Foundation to stay current on national issues and gives our sector an ability to respond in unified and coordinated efforts. I admire how she continues to get done what is needed most, like new solutions to housing for youth and elders.”

A piece of advice she has for young women who want to make a difference in their communities is:
“Dig in and keep going. This work isn’t always glamorous or instantly rewarding, but after spending nearly 15 years in the nonprofit sector, the rewards come in unexpected and sometimes startling ways. I would also advise to listen to generations ahead of you about their experiences, their setbacks and lessons learned. There is wisdom that can be combined with your energy and drive for chance that can make the lasting impact you are really looking to achieve.” 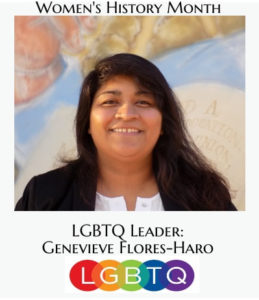 Genevieve Flores-Haro is the Associate Director at Mixteco/Indígena Community Organizing Project, where she supports the organization’s policy priorities, she also supervises programs specific to health advocacy, mental health and domestic violence, including two multi-year mixed methods research studies. She also sits on the Board of Directors for Ventura County’s local LGBT organization Diversity Collective, and is a Member-At-Large for the Ventura County Women’s Political Council.

One piece of advice she has for young women who want to make a difference in their communities is:
“I would say to not be afraid of your voice, and to use your voice unapologetically. Too often as women, we’re told to stay quiet, to make room for others to speak, or to apologize for speaking. We forget, or we don’t realize, that we have a voice of our own and it’s powerful in its own right. And we can use our voices to share our stories and lift up those voices who are in the margins even within our ranks, like our non-English speaking, immigrant women.
“If we look back into the not-too-distant past, we can see that it has been young women of color who have birthed impactful movements through using their voice, from our black & brown trans sisters at the Stonewall Riots and to the women behind Black Lives Matter and most recently Emma Gonzalez who is leading the youth fight against the NRA. Our voices and our personal truths are what push movements within our communities, and we as women need to own that.”