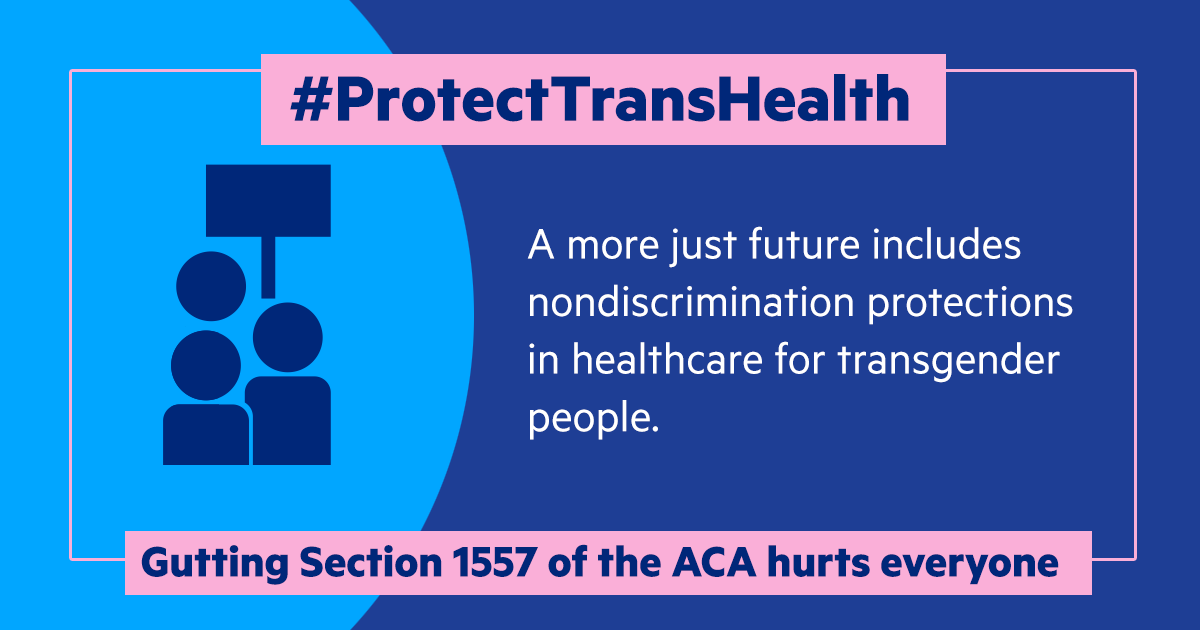 Today, the Trump Administration released its final rule making changes to Section 1557 of the Affordable Care Act and rolling back the Obama-era guidance explicitly prohibiting discrimination based on gender identity. While courts have consistently affirmed that federal rules banning sex discrimination also ban discrimination against transgender, nonbinary, and gender nonconforming people, this rule is cruel and callous attempt to spread confusion and encourage discrimination by the health care industry. The timing of this rule – released during a pandemic that disproportionately impacts LGBTQ people and people of color, during Pride month, and on the anniversary of the Pulse nightclub tragedy—is especially inhumane.

We know there are questions from transgender Californians today: What does this rule mean for me? Will I lose access to my health insurance/transition-related care/doctors? That is exactly the type of fear that the Administration is attempting to instill in our communities at this time. It’s important to know – discrimination is still illegal in California.

California independently protects equal access to health care regardless of a patient’s sex, gender identity, or gender expression, including access to transition-related care. The California Department of Insurance issued regulations in 2012 codifying nondiscrimination protections for transgender and gender nonconforming Californians, including defining prohibited discrimination in the provision of health care services. The Department of Managed Health Care [Gender Nondiscrimination Requirements] and Department of Health Care Services [Ensuring Access to Medi-Cal Services for Transgender Beneficiaries] both issued letters clarifying that the Insurance Gender Nondiscrimination Act prohibits regulated plans from denying care on the basis of a patient’s actual or perceived gender identity.

In the coming weeks, we plan to release additional tools and resources for transgender, nonbinary, and gender nonconforming Californians that provide detailed information about existing nondiscrimination protections and how you can assert your right to health care.

For a great overview of transgender health in California, you can also see this resource from Transgender Law Center.

All three agencies that regulate health insurance in California have reiterated that California’s nondiscrimination protections are still in effect. You can see below for their letters to insurance companies about protections for LGBTQ Californians.

Join Us in Advocating for TGI Research Participants

Dear Trans, Gender Non-Conforming and Intersex (TGI) Community Members, In early December 2020, researchers at Vanderbilt University and UCLA reached out to transgender people across Southern California who are active in the community, work in advocacy, or work for organizations that provide care, resorces, or safety for folks who...