Section 3040 of the California Family Code is now amended to include “(c) The court shall not consider the sex, gender identity, gender expression, or sexual orientation of a parent, legal guardian, or relative in determining the best interest of the child…”. 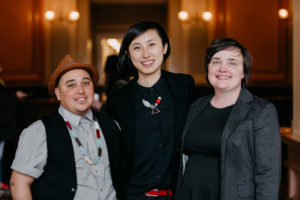 Thank you to Senator Durazo for authoring SB 495 – Bias Free Child Custody and her amazing Chief of Staff, Jennifer Richard both of whom invited our coalition in to the process and provided guidance navigating the legislative system. Thank you to those in the Senate and Assembly who voted to support our families and to Governor Newsom for signing this bill in to law. Thank you to my amazing Women’s Policy Institute teammates Tracy Zhoa from API Equality Los Angeles and Ezak Perez from Gender Justice LA; your kindness, strength, and leadership is inspiring. Thank you to our coalition members and co-sponsors Reba Birmingham and Kendell Evans at the Long Beach Bar Association and Tami Martin and Puneet Purewal at Equality California whose expertise and partnership made this happen.

Our coalition heard stories from families across California. Those of you living in conservative or rural jurisdictions, those of you unable to afford attorneys with LGBTQ case law expertise, those of you scared to lose your children if you left an abusive relationship.  The California Legislature and Governor have heard you too.

SB 495 passed both houses without a single no vote! 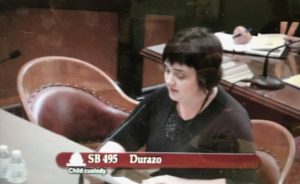 When SB-495 was being heard by the Senate and Assembly Judiciary Committee’s, I had the honor of presenting my personal testimony on behalf of our coalition. I am including it below as just one example of why California needed to explicitly protect our families in the Family Code.

“My name is Mandy Taylor and I am here to ask for your support on SB495 Bias Free Child Custody. I am a part of the Women’s Policy Institute LGBTQIA Justice Team, one of the sponsors of this bill. I am a social worker, an advocate, a member of the Queer and Trans Community, and the parent of an amazing teen.

When my daughter was an infant, I left my abusive boyfriend and filed for full custody to ensure her safety. For the last fourteen years, I have had full physical custody and the Family Court has consistently enforced supervised parenting time for my co-parent. Our child’s safety and well-being was paramount to me. Because of that, for years during the lengthy custody process, I did not feel safe ‘coming out’ about my sexual orientation. My ex had made his beliefs about LGBTQ people very clear and I knew I could expect retaliation if he knew my sexual orientation.

I was a single parent with an infant.  I had no college degree. I was in a domestic violence program trying to deal with my trauma. I was on welfare and attending school full-time; I didn’t have the money to hire an attorney or the time and knowledge to research case law. If I couldn’t guarantee an unbiased judge, mediator, and opposing counsel – Being ‘out’ was too much of a risk to my daughter’s safety. I waited three years to be publicly ‘out.’ I waited until I finished school. I waited until I was solidly middle-class. I waited until I could afford an attorney. I waited until I had community that helped me feel safe. No one else should have to wait like I did.

By codifying and clarifying case law into statute, SB 495 helps protect children by ensuring that bias and discrimination have no place when determining the best interests of a child. By putting these protections in to the Family Code, our representatives reduce barriers for low income parents and support community networks by making protections easier to access and understand.

All children deserve to feel safe, cared for, and loved in their own home. There is no room for bias or discrimination.” 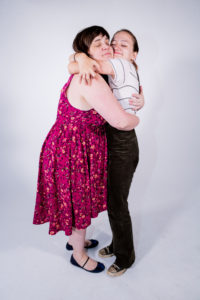 Many LGBTQ communities are under-resourced which prohibits families from accessing an attorney with LGBTQ case law expertise. LGBTQ caregivers without economic resources, particularly those in conservative or rural jurisdictions, often feel powerless to ensure a bias free custody proceeding. Being able to access a fair custody hearing should not be dependent on the parent’s economic and social capital. This bill makes it clear that LGBTQ caregivers can appear before the judge and state their case for custody or visitation rights without having to worry about the decision being biased because of their sex, gender identity, gender expression, or sexual orientation.

Three decades of peer-reviewed research on LGB and Trans parents conclude that there is nothing inherent in any person’s sexual orientation or gender that renders them a less fit parent, or that represents any potential harm to their child. SB 495 removes outdated, unscientific discrimination against LGBTQ caregivers from child custody decisions.

Arguing over the relevance of a person’s LGBTQ identity as it relates to their ability to parent leads to more hostile custody proceedings, which reduces the likelihood settlement. This is not in the best interest of the child, because settlement of custody issues relieves strain on the family unit and on the child. Transgender parents, in particular, often face extreme bias and discrimination in custody cases, leading to a loss of custody or even contact between parents and their children, contrary to the children’s best interests.

Lesbians, gays and bisexuals (LGBs) who are out to others have lower stress hormone levels and fewer symptoms of anxiety, depression, and burnout, according to researchers. Choosing to share or conceal one’s orientation or gender can be a complicated decision dependent on class, race, family support, and sense of safety – the fear of orientation or gender negatively impacting child custody proceedings should not be an added burden to this already fraught time.

By codifying and clarifying case law into statute, California helps protect children by ensuring that bias and discrimination have no place when determining the best interests of a child. By updating these protections in to the Family Code, we reduce barriers for low income parents and support community networks by providing easier to access and understand protections. 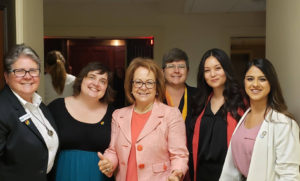 All children deserve to feel safe, cared for, and loved.

Today, the Trump Administration released its final rule making changes to Section 1557 of the Affordable Care Act and rolling back the Obama-era guidance explicitly prohibiting discrimination based on gender identity. While courts have consistently affirmed that federal rules banning sex discrimination also ban discrimination against transgender, nonbinary, and...