How identity and visibility relate to curbing commercial tobacco use

Like many, I’ve spent the majority of my time in my apartment for the better part of a year. This past March marked the anniversary of California’s Stay at Home order, one of the most restrictive in the nation. This whole year has led us to question our beliefs around agency and control—and along with it, our sense of belonging and visibility on both deeply personal and collective scales. More than ever, we are questioning what it means to be a contributing part of society and developing scaffolding for what accountability can look like.

Conversations around community and accountability often involve those of identity. I identify as Southeast Asian American. Specifically, I am Filipino/Chinese and a 1.5 generation immigrant from the Philippines. I also identify as bisexual and queer. Having been raised in a strict Catholic home and coming from a country where descriptions of queerness have traditionally been limited, it is so clear to me now how impactful it is to be able to call something by its name and then give it meaning, context, action.

The ability for folks to define themselves better as an individual among community can be empowering. On a personal level, doing so has helped me understand where I’m starting off and then where I need to go. On a population level, it helps define nuances about pockets of communities that could have otherwise been silenced by “the majority.” It’s often these neglected nooks within Big Data that continue to be overlooked time and time again, leading to some communities rarely being reflected accurately in well-known data. This emphasis on breaking down the nuances of Big Data is the basis for advocacy towards disaggregated data and having better baseline numbers for marginalized communities. When it comes to addressing difficult, decades’ old public health concerns such as commercial tobacco use, the clearer understanding that disaggregated data can bring can help to curb use and support cessation altogether.

When it comes to understanding what a smoker looks like, falling through the data cracks has impacted my own experiences. As someone who simply didn’t have the understanding to see myself in the environment reflected back to me, it was hard to give my own experiences relevance. In my mid-thirties now and having worked previously as a physician and a high school teacher before then, it’s probably a shock to many when I tell them that I picked up my first cigarette when I was thirteen years old and then smoked, quit, relapsed, quit, relapsed, then quit again. This cycle went on for several years. When I really think about it, the most surprising part about my story is probably the fact that I’ve gone years working in healthcare, public health, and tobacco control without ever mentioning my own previous struggles around smoking!

I am proud to say that I am no longer a smoker. While I take responsibility for my own choices and previous struggles with tobacco use, I can’t help but wonder if I would have thought differently about that first cigarette had I not had regular exposure or access to tobacco in my environment—either at home, with extended family, or with friends at school or around the block. There’s not one reason that applies to everyone who has ever smoked, at least as far as what compelled them to pick up that first cigarette. We’ve all had our reasons, and that goes for anyone in recovery or still struggling with any kind of substance use. In looking back, I now wonder what kind of resources I would have needed that could have led me to drop that first cigarette before I ever put it to my lips. Could anyone have looked at me then, a nerdy and in-the-closet Southeast Asian teenage girl and ping me as a smoker?

Admittedly, visibility, especially when it comes to communities, is most obvious when it manifests in numbers. In a world where Big Data is king, I get its positives and drawbacks. On the one hand, it allows us to grasp very tangible facts from which we can easily produce measurable goals. So, data from 2013 through 2014 show that the rate of smokers among Filipinos is 18%? And you say the prevalence rate measured in 2016 for LGB adults is 20.5%? Great! Let’s work to lower those rates by x amount by x years. However, these numbers don’t provide much nuance. Why are those prevalence rates much higher than the 15.1% of adult smokers in the US cited by the CDC in 2015? What don’t the numbers tell us?

While numbers aren’t the end all, they certainly invite exploration. As rates of electronic smoking device use (vaping) rise and youth face their own updated version of targeted advertisement promoting tobacco use through vaping, there is even more reason to update our data and in doing so, give community leaders, health workers, and policymakers better starting points to provide our communities with much-needed resources to address tobacco use in ways that are culturally sensitive and much more accessible. In short, we need better ways to understand what our communities need, and to do that, we must continue to build our language to find clearer words on where to start.

I know I cannot speak for everyone who identifies as part of the AA and NHPI diaspora and/or LGBTQ+. In sharing my story, my hope is that enough of our community members make their experiences with tobacco known so that we can be more visible. Visibility is not the end all, but it’s a good start and a necessary one. You can make your experience visible by completing the We Breathe Survey and share about your tobacco use. Eligible LGBTQ+ participants will receive a gift card for completing the survey. 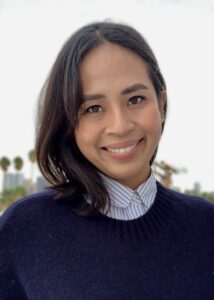 Marielle Reataza (she/siya) is a healthcare reform advocate and is on staff at Asian Pacific Partners for Empowerment, Advocacy and Leadership (APPEAL) as Senior Program Manager. She currently serves as Co-Chair of the OUT Against Big Tobacco Los Angeles Coalition. Marielle is passionate about public health and multidisciplinary approaches to improving health equity, access, and affordability, having a background as a high school science teacher, physician, and in health policy and law. Previous to her position at APPEAL, she worked on smoke-free multi-unit housing in the City of West Hollywood and the City of Rosemead. In her free time, she loves to tend to her garden, practice yoga and Pilates, paint, sing and play guitar, and hang out with her cat George. Marielle is based in Los Angeles, California.

2021 Recall Election: Vote Like Your Health Depends On It!

Dear Community, Today is Election Day.   The stakes of this election are incredibly high. The lines that have been drawn by both sides, asking us to decide what the future of California will look like. Will our state continue to welcome immigrants? Will we continue to teach about LGBTQ...