How did smoking affect my life growing up?  What is smoke? Is it a vapor? Is it the result of broken dreams? These were some of the questions that I made to myself when I took a Child Development class back in 2006. This simple class opened my eyes as to some of the circumstances of my early life. For the first time ever, a veil had fallen away from my eyes as I engaged in one of the most poignant introspections of my life.

I am a transgender woman, and I was born in Calexico, CA in 1980 during a time of economic crisis for my young parents. I was raised in a seedy neighborhood in the city right across the border on the Mexican side known as Mexicali. My parents rented a small place in a vecindad close to Lerdo and Altamirano, a refuge for thieves, prostitutes, and desperate foreigners attempting to find the way to cross over into the promise and bright future of the United States of America. So where does the smoke come into play in this story?

As it turns out, some of my earliest memories as a toddler are those of adults and even other children smoking and drinking on the street where we lived. I remember the summer heat and the second-hand smoke that was taken in by my little innocent lungs. I remember seeing adults puffing on cigars and cigarettes like great dragons, fierce and unkind. Discarding the cigarettes with a certain sense of disdain for their nasty act, but also with a sense of shame for having subjected someone more innocent to such a violent smell. As a young toddler and as a person labeled as a boy at birth, tobacco and smoking were a part of my life. I grew up inhaling this poison and playing with ashtrays. Tobacco and smoking were without a doubt negative factors in my early health and social development.

Curiously enough, my own grandfather Heracleo had in the 1960’s worked as an operator in a tobacco processing plant called Cigarrera La Moderna in Nayarit, Mexico. In 1968, my grandfather immigrated to the U.S. where he, my father, and my uncle Heracleo worked in the fields throughout California. In the course of a few years of unity and progress, my Uncle Heracleo fell out of the trio and into a world of vice, which some say began with the purchase of his first carton of cigarettes.

My father, Miguel loved his brother Heracleo. Even though my uncle Heracleo had changed so much, he was still willing to lend him a hand in the hope that he would turn his life around. My father and uncle would spend most evenings drinking beers and smoking cigarettes in the living room like two majestic dragons puffing and breathing out fire. Oftentimes, I would be right there in the middle of it all. The smoke-filled air would cause me to cough and my eyes would begin to water. My throat would have a coat of tar at evening’s end. Unemployed and out of work, my uncle was quick to fall into bad habits and quickly found the wrong sort of friends who would help him procure drugs, women, and “Transas.”

My poor mother had never been easy with his heavy presence in our home and his raucous, outrageous language and bizarre behavior. His friends would lounge in her living room, and on one occasion, one of my uncle’s girlfriend’s even stole a brand new dress out of my mother’s closet. My uncle Heracleo just laughed at my mother as she confronted his woman; and my mother seethed with anger at all of them. I remember that scene as a young child because of the cigar that hung like a churro out of my uncle Heracleo’s mouth. He and his friends had no respect for my mother.

In 1984, my family moved to Oxnard, California. My father decided to rebuild his life, and he was sure to stay away from his brother. We adapted to a new home here in the United States.  However, my health suffered from the ages of six to 12 due to asthma which I blame in part to my uncle and father’s smoking throughout the years. I remember having three very bad asthma attacks that I feel almost claimed my life. Breathing the breath of life was something very precious for me during these episodes. I remember feeling scared, and as a young boy feeling like I could die from not being able to use my lungs. My father came to realize that he should quit smoking, and he did. He quit cold turkey. I love my father for having quit his tobacco use because he gave me a new lease on life. Luckily, by the age of 12, my asthma subsided at the onset of puberty. Yet for me, the end of one challenge was the beginning of another. I gained a strong pair of lungs, but I longed to transform into a beautiful woman someday.

I recall being similarly exposed to smoking at school, specifically in the bathroom and on the bus. Oftentimes I had to ride my bike to school to avoid the bus since the smoke had become such an offensive and violent smell for my lungs. There would always be a group of young boys smoking in the bathroom at school and I would usually always have a negative encounter with them. I simply wanted to use the bathroom, but as soon as I went inside they would find a way to develop a fight since I would usually neglect their offer to smoke and they labeled me as a feminine gay boy at the time. Their smoking provided a false sense of reassurance in themselves. They enjoyed claiming their labels as a “vato loco” and as macho men who enjoy smoking since that was the “cool” thing to do. I couldn’t relate to those kinds of habits. Today, it’s still difficult for me to find a safe space for socializing since most LGBTQ+ bars and social scenes have outdoor smoking available. I love dancing and hearing the music, but the secondhand smoke is too much for me. If it wasn’t for the smoke, I would feel more comfortable going to the bars with my community.

As the years went on, I slowly came out of my shell to become the trans woman I am today. The tobacco and smoke marked my early life in a negative fashion indeed. My advice goes without saying, but don’t smoke! It is a waste of time. To smoke is to slowly die and it dishonors your body as a temple. Your health matters!

If you identify as LGBTQ+ and use or have used tobacco products, take the We Breathe Policy Platform Survey. We Breathe is a program that aims to reduce LGBTQ tobacco-related disparities. The survey will help We Breathe identify ways to prevent and reduce tobacco use among LGBTQ+ people. 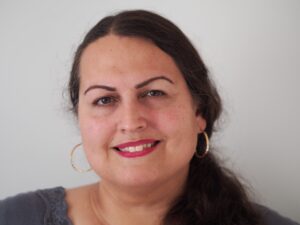 Angela Soto is a proud Mexican-American Transgender Woman.  She was born in Calexico, CA in Imperial County.  She currently resides in the Imperial Valley, and was raised in the city of Oxnard, California.  Soto earned an Associate in Arts in Liberal Arts and Sciences with High Honors; and transferred to the University of California at Santa Barbara where she earned her Bachelor of Arts in History with Honors.  Angela has served as both a Volunteer and Board Member at the Imperial Valley LGBT Center. She also participated in the 2020 Census and Pride 2020 festivities as a photographer. Angela is an avid reader, loves hiking in nature, and has a profound love of photography that satisfies her creative and artistic side.  Soto has plans to get her Teaching Credential in the near future and aspires to teach youth and continue serving her community.